One nice thing about the new camera (which isn't even new anymore; I've had it more than a year): it appears to be capable of taking pictures of Pelargonium flowers. The old one always gave me over-saturated colors that obscured the details.

I go back and forth about Pelargoniums: when I started at the garden center, I liked them. After I'd been there a while, I hated them, especially the smell of them. (I considered writing a profile around the "person" of Newborn, or Infant -- they have very rounded features, they frequently smell funny, and everybody was always talking about them as though they were super-delicate. It still kind of makes sense to me.) Since leaving the garden center job, I've been appreciating pels again. Why absence makes the heart grow fonder with Pelargoniums and not Phalaenopsis, I don't know. 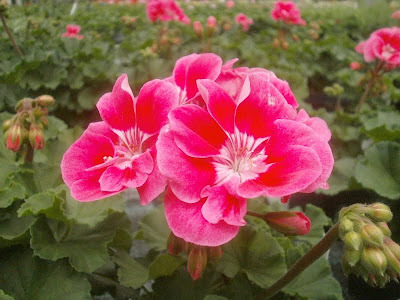 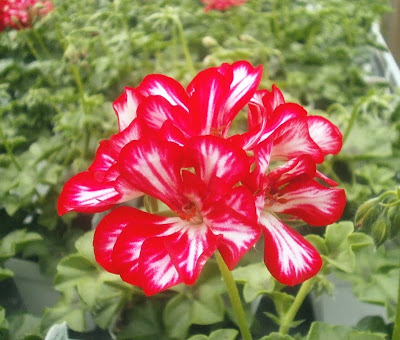 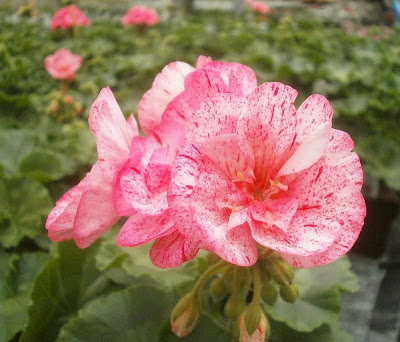 I only actually own two pels. One is a 'Vancouver Centennial' that I've had for about two years. I can rarely give it enough light to get the leaves to color up properly (it's an inconvenient size, and competition is fierce for the high-light spots), but it's otherwise been agreeable. 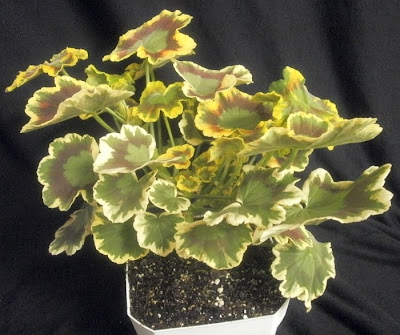 Pelargonium 'Mrs. Pollock.'
The other, 'Mrs. Pollock,' only arrived a couple weeks ago (one of only TWO plants I've bought in the last two months, the other being the Rhipsalis I posted about a while back -- such superhuman restraint!), and all indications are that it's going to have the same problem. I hope to work something out that everybody is okay with. Nina and I are currently sorting through everybody's applications for one of the coveted outdoor positions this summer (yes, the plants fill out paperwork. We all get paperwork here.), and Mrs. Pollock makes a strong argument. We'll see.

I love the mental picture of you and Nina looking through the plants' applications!

"Why I Deserve the Front Porch," an essay by Mrs. Pollock.

I haven't bought any houseplants at all in months - only vegetables and herbs. (I'm so fed up with being broke!)
As for Pelargoniums, I can tolerate the upright ones (I have one myself, though I keep it more for sentimental reasons that because I actually like it), but the ivy-leaf types... ugh. Even having ivy in their name can't make me hate them any less - the only plant I hate more are wax begonias! I'd sooner fill all my windowsills with Phals before allowing one of those pelargoniums anywhere in the Nettle Nest!

I like this profile idea.
Another way they're like infants:
they're not that interesting, until you have one of your own.

I tried a Mrs Pollock one year, but was inexperienced with Pelargoniums; too little light and too much water later and it didn't make the summer. Now I *think* I've learned from my mistakes, and I'm trying two new varieties this year (well, new for me); they're the ivy x zonal crosses, one is Caliope Red and the other is Caliente (I want to say Orange ... it's orange-y). Crossing my fingers ... they already look like they fill out baskets better than just the zonals, judging by what's coming into the nursery.