When I worked at the garden center, Phaius were very occasionally on the availability list from our supplier, but I never brought any in because . . . I don't remember. Our supplier used to try to push them on me, too, and sounded surprised when I declined to order any. 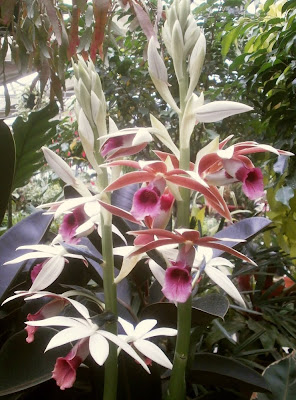 They've gotten a few in since I left, though, and . . . they're nice. I didn't get pictures of the foliage (which I regret), but I like it nearly as well as the flowers -- it's pleated a bit, like Asplundia, but otherwise long, narrow, and oval (like Canna or Alpinia). 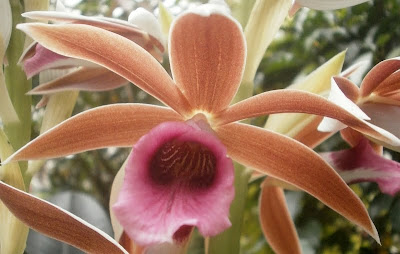 The common name is "nun orchid," because a structure deep inside the flower resembles a nun with a white wimple. I looked, but couldn't actually see this on any of the flowers in this post, so I don't have a picture, sorry. (Garden Adventures does, though, as well as having more information about the plant.) 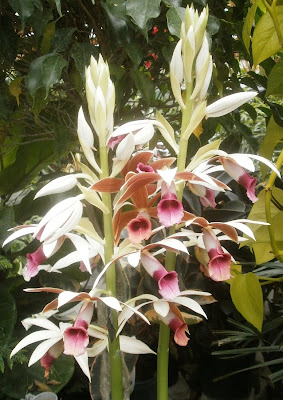 I didn't buy, because they were out of my price range (like everything else). That may not be such a terrible thing, though: I don't know what they're like to grow indoors, and I don't have room for one anyway. But they're interesting plants. Perhaps someday.

It's a cool plant! I just got one myself recently.

Ia that all in one pot? That's quite a show.

Yeah, they were two plants / 8" pot. I don't remember the price; I may not have even looked at the price.

Those are nice plants. Our local orchid garden center carries quite a few Calanthe and they are similar I guess with the nice foliage that's deciduous.