We don't live in a big town. The entire town comprises thirty-one blocks, says Google Maps, plus four cul-de-sacs. (The town I lived in until I was eleven only had ten blocks, and no cul-de-sacs, though, so it could always be worse.) This makes walking Sheba sort of boring, because even if I take routes through alleys and stuff to try to expand the options, there are still only just so many paths to be taken, and I've already been everywhere in town several times over.

So when the weather is nice enough for it, I've been walking outside of town with Sheba. There's a particular gravel road I like, heading west out of town, that's fairly quick to get to and relatively untraveled during the day. 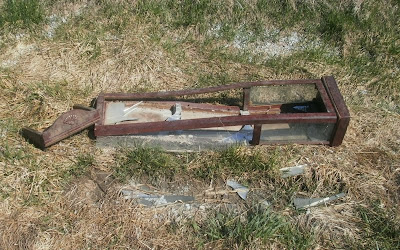 But so the point is that it's an okay place to walk a dog, during the day, and it makes for about a two-mile walk. I worried a little that maybe all the gravel might be hard on Sheba's feet, but there's actually enough grass along the side of the road that I don't think she spends much time on the gravel, and obviously I don't encourage her to walk down the middle of the street anyway. Unless I want to get a picture.

No doubt we'll get tired of this route soon enough too, but it was nice to discover. Now if we could only have some days when it's nice enough to go on an extended walk. Seems like all we've had for the last two weeks is rain and cold and gray and yuck, grumble grumble.

Very interesting. I live in North Dakota and it's always impressive to watch as a whole winters worth of roadside trash is revealed as the snow melts in the Spring. It's essentially the same as you described - 85% beer cans.

We've had the same type of weather here, too, grumble, grumble...

If only we could exchange weather for a couple of days. Summer has officially just started and I'm already missing the cold and light rains.