Still trying to get the list together for the plants I intend to sell or trade (which is going to take a while longer; there are many pictures, and I suspect I'm including too much information about the plants in question but I'm sort of paranoid about sending one to somebody and then having them not like it, or having it be not what they were expecting, and then feeling like I should do something to fix that -- except that by the time it reaches that point it's sort of too late to fix, so I'm inclined to share everything I know about the plant in question in hopes of forestalling this kind of awkwardness. Except that then I realize that I'm dumping tons of information on the readers, most of whom will find it irrelevant and tedious, so I delete most of it, only to succumb to the fear that I've omitted important details, so I add it all back in again. Which is why it's taking a long time.), but figured I should still post something today, so why not another plant I didn't buy from the ex-job? 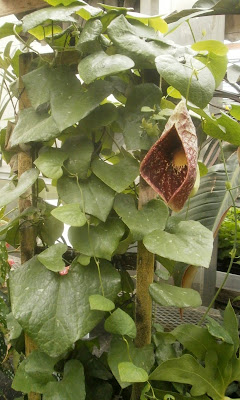 It's at least a plant I'd never seen before; I'd barely even heard of it. (I think I've seen it on a couple other blogs, but it's not something people typically try to grow, particularly not as a houseplant.)

Younger Former Coworker said it had an unpleasant smell, but either I couldn't smell anything, or I forgot to check. (It could be that Younger Former Coworker makes up fragrance-related things to tell me about, so I'll question my own perceptions.) It certainly has the I'm-pretending-to-be-a-dead-animal look to it. 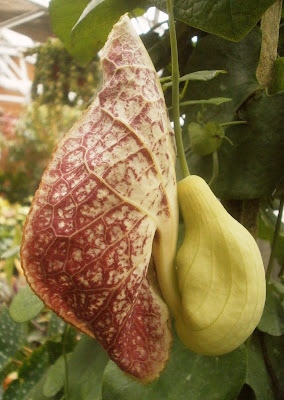 Younger Former Coworker also referred to the plant as "the nut-sack plant." She spends a lot of time around livestock.

I'm a little suspicious of the ID here: Aristolochia gigantea was the name on the tag, but the A. gigantea results from Google are the wrong color and size. It may be some other Aristolochia. It also wasn't completely opened-up yet, so the resemblance might be better now. 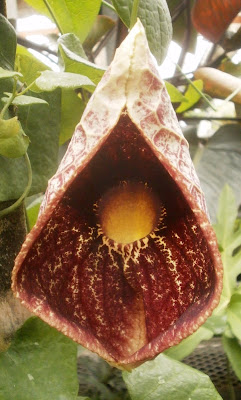 You could do a synopsis of information followed by a flood--a two-part presentation to please everyone (except for you, 'cause it's more work?).

I am terribly interested to see these offerings, although I have some likely ideas.

That is something I don't think I'd EVER be able to walk away from. I've tried growing it from seed so many times with no luck.

Saw one of these with a dozen or more blooms at a conservatory last year. Huge, impressive flowers. Didn't notice any scent at all and with that many flowers opened I would have expected to smell something if they had a fragrance.

how big were these blooms? that may help in identifying it - it looks like it could be gigantea, indica or elegans, but I'm not sure
coincidentally though, I did just sow seeds for elegans and ringens last week

Just estimating from the picture, I'm thinking it was about 5 inches from top to bottom.

I forgot to mention about the smell thing - When I was in PA working at the botanic garden they had a true A. gigantea and it smelled butterscotchy but only for like an hour after it opened. It wasn't a strong smell by any means though.

Dude. You have write-ups on so many of your plants. Provide a link?
Maybe have in the listing preferred water and light requirements, see the link for more info?

(I know this might just be setting you up on the ones you don't have write-ups on... but really, if you can use the resources you've already created - do that!)

A carnivorous plant was named ofter this plant... Nepenthes aristolochioides, not hard to see why:

Perhaps on the ones without a profile you could offer more information upon request.

Also, do we need to be compiling lists of plants we have to trade or do you know exactly what you're looking for?

Well, you don't need to be doing anything, but no, I don't necessarily have specific stuff I want -- it's more or less like it was last year, in that I'm willing to trade for stuff I don't necessarily want if 1) that's what you have to trade and 2) I don't own it already.

I grew Aristolochia littoralis syn. elegans from seeds five years ago. Since two years it has been flowering every summer. I keep it as a house plant.

Yesterday the Aristolochia gigantea that I ordered online has just delivered. I paid 24€ + 10€ shipping. It's a big plant with a flower. I tried to grow it from seeds many years ago, but failed. I bought an adult plant, because I don't want to wait. Moreover the price is quite okay for me.

The plant in your photo should Aristolochia gigantea.

LOL @ nutsack plant...though by the looks of the first and third pictures it's not really getting any breaks in the yonic department, either.

At the grocery I used to work at, we had a local plant supplier who specialized in bromeliads, but occasionally had some funky interesting things. He was an older gentleman who was rather fond of getting fresh with the ladies, so we tried to keep him as quiet as possible around customers. Unfortunately one day he brought in one of the larger dangly Nepenthes, and proudly shouted to a big crowd what he named this one: "Bull's Balls".

YOU ARE FUNNY.I HAVE ONE OF THESE ARISTOLOCHEAS.IT'S A WEED. I CUT IN DOWN IN WINTER, PUT IT OUT IN SUMMER AND IT GETS THE STRANGEST FLOWERS.I AM PLANT CRAZY.I HAPPENED UPON YOUR BLOG AND WAS HAPPY TO SEE THAT SOMEONE ACTUALLY HEARD OF THIS PLANT.I GOT IT MAILORDER PROBABLY LOGEES.VERY EASY.

PLEASE STOP SHOUTING AT ME. I CAN HEAR YOU.

Hi, I'm from Brazil and I have a couple of Aristolochia gigantea in my garden. They're blossoming right now. This one is native to Brazil. If you need any info, just ask, I'll be happy to share my experience.