Some websites say "Dendrobium nobile Love Memory 'Fizz.'" I don't know what this signifies, exactly, and consequently have no idea whether it's accurate or relevant, but I include it for the sake of completeness. 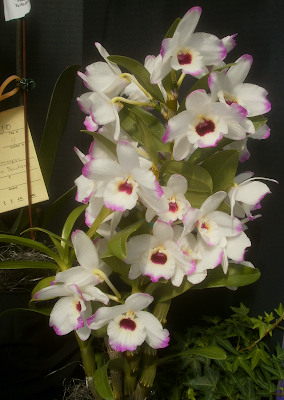 Should perhaps also note that I find this one a lot more appealing than I do most Dendrobiums. Which also may not be accurate or relevant, but what the hell.

And now some unfinished Schlumbergera business:

I attempted to narrow down the field of possible names for S. #083A -- 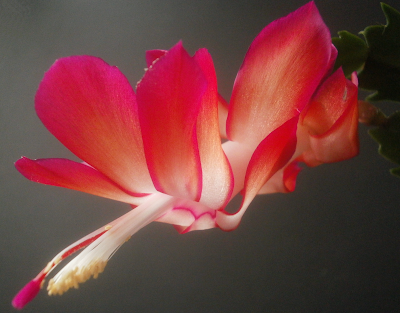 -- and instead wound up enlarging it. Part of what happened was that on Monday, there was news about Elon Musk (CEO of SpaceX) announcing that he was naming two "autonomous spaceport drone ships" after ships from Iain M. Banks' series of Culture novels, and their names would be Just Read the Instructions and Of Course I Still Love You.

Which sent me down a wikihole of reading all the names of all the ships in all the novels,1 some of which were very amusing (and possibly even more amusing in context: I wouldn't know),2 and that led somehow to the discovery of a Twitter account that periodically proposes new possible ship names along the same lines as the originals.

So, we have an abbreviated version of the list I came up with originally (about half of the originals have been dumped or altered), plus some of the names proposed in the comments of the #083 introduction post, plus a handful of names that occurred to me spontaneously just going about my regular business, plus a substantial chunk of names that are Iain M. Banks Culture ships, other people's ideas for Culture ships, or my own ideas for Culture ships.3 In alphabetical order:

"AbFab Darling:" Enough of an improvement on "Sweetie Darling" that I'm going to forget about "Sweetie" in favor of "AbFab." Successfully evokes intense colors thrown together haphazardly. Suggested by Diana.
"Casino:" Under consideration. You have to admit, the flower's color scheme does overlap that of most (all?) casinos. (Do an image search, I dare you.) Probably a little too generic, ultimately: a particular casino would be more interesting. But I'm sure all the particular casinos would sue me.
"Delirium:" From Paul's suggestion of "Delirious." Also possibly too generic, but nevertheless being considered. Possibly gets me minor nerd cred points for the (very) glancing Neil Gaiman reference.
"Gaga:" Paul's suggestion. I'm a little worried that it might age badly, depending on what Lady Gaga does with herself in the future. I'm, like, thinking about thinking about this one. It does have going for it that it'd be the easiest candidate to type.
"Psychedelic Bunny:" From Nadya W-G's suggestion. There's certainly something psychedelic going on here. The bunny part is questionable.4
"She's So Unusual:" Prompted by Paul's riff ("So Unusual") on Claude's suggestion ("Cyndi Lauper"). Makes sense with the plant, and I have nothing against Cyndi Lauper5 or the album in question. It could work.
"Tamika Flynn:" Seemed to be the crowd favorite from the original post,6 growing on me, and the previous arguments in favor still apply.
"Uh Hey Baby:" I'm cooling off on "Uh Hey Baby," as other, more evocative and colorful options have been suggested, but I'm not yet prepared to rule it out.
"You're Not Going Out Dressed Like That:" Also Culture-ship-esque. Unwieldy, and I cringe imagining all the extra typing I'd have to do, but somehow . . . appropriate?

Honorable mentions, but not serious consideration, to:

"Gravitas Rainbow:" Both a pun7 and a gravitas joke. Stolen from the Twitter account. The "rainbow" almost makes it work, but I don't like it well enough to make it permanent.
"It's More of an Aesthetic Question:" Culture-ship-type option. Stolen from the Twitter account. Probably too long to be serious, plus if it's going to be a super-long name, "You're Not Going Out Dressed Like That" is better.
"Naked Celebrity Gravitas:" Stolen from the Twitter account. Not serious, I think, but just imagine the search engine traffic I'd get!
"Ruth Bader Ginsberg:" Not much of a contender, on the grounds that I can't imagine her wearing colors like this, even though I'm sure she probably has at some point or another, and maybe even is right this moment. I'm not sure I've ever seen the Notorious RBG in regular clothes clothes. But there really needs to be something named for Our Most Adorable Supreme Court Justice of All Time.8 Maybe an Episcia.
"Tripping Balls:" Well in line with the psychedelia angle, but probably too vulgar for actual consideration.

Anyway. So it looks like we have nine serious(-ish) candidates. Advocate for or against them in the comments;9 I plan to decide and announce a name by 2 February. Though I may have to pull a name out of a hat or something: however hard I try, I can't seem to eliminate any more than five options.


1 I have not actually ever read any of Iain M. Banks' science fiction novels, though I've read two of his mainstream books, a long time ago (Whit and The Crow Road). I understand that the Culture series are considered to be good by the people who consider that sort of thing.
2 e.g. So Much For Subtlety; You Would If You Really Loved Me; I Blame My Mother; I Blame Your Mother, etc. There's also a running joke regarding the word "gravitas," which includes Zero Gravitas, Very Little Gravitas Indeed, and Experiencing A Significant Gravitas Shortfall, which will explain some of the name options you'll see momentarily.
3 If you proposed something that didn't wind up on the list, the most likely reasons I didn't include it are that it implies colors that the flower doesn't contain ("Aurora Borealis" or "Mardi Gras" really should be at least partly green), I included a riff on your suggestion but not the actual suggestion, you made the suggestion after I completed writing this post and I didn't want to spend my whole Monday re-editing it, or you suggested a group of related names and I picked one out of that group instead of all of them.
4 I have a hard time seeing Schlumbergera blooms as anything other than hummingbirds, personally. But "Psychedelic Hummingbird" seems redundant, so we'll let "Bunny" stand.
5 (as if anyone could)
6 (among those expressing an opinion)
7 (on the TV show Gravity's Rainbow)
8 (not counting Clarence Thomas)
9 Or say something about the Dendrobium at the top of the page. You remember the Dendrobium, right?
Posted by mr_subjunctive at 3:00 AM

You threw in that Dendrobium in just for me, didn't you? You're evil. If I want to see white we've got 14 inches of snow just outside my window (so far).

I still like AbFab Darling and Tamika Flynn but I have to admit to really liking the name Psychedelic Bunny. You'll have to use that one at some time - maybe for something with more white?

I like the idea of You're Not Going Out Dressed Like That but boy that's a lot of typing for a plant name.

That photo was scheduled like nine months ago. If you want no white during winter, you're going to have to request it a lot earlier. (If it helps, the next orchid is sort of a dark purplish-red, and the next few Schlumbergeras are orange, slightly lighter orange, slightly darker reddish-orange, peachy-pink, and orange, so you're safe for a while.)

You're Not Going Out Dressed Like That really is just way, way, way too long. Alas.

"Not Dressed Like That!" would be sufficient for evoking the whole parental situation.

The flower does have a lovely sense of movement, perhaps another space-related one? Re-entry. Orbital Re-Entry. Drag Coefficient at Re-entry.

What a lovely tribute for Iain M Banks from Elon Musk, he would have been delighted.

That twitter account had some great suggestions. Something about "Coalition of the Willing" spoke to me for your gorgeous flower. But that's a lot of typing.

I love Pat the Plant's suggestion of "Not Dressed Like That!".

If you were asking for more ideas (which you are not) I would say Schlumbergera "Alannah Hill" fits nicely - she's an iconic Australian fashion designer who uses lots of bright colours and floral motifs, and all her designs have wonderful Culture ship-esque names ('To Catch a Theif' dress, 'Read My Lips' sunglasses, 'Take Me Home' cami, 'A Reluctant Kiss' cardi etc etc).