Adam is one of the divisions from 0115 Erlene Adopter. His flowers look the same as all the other Erlenes, 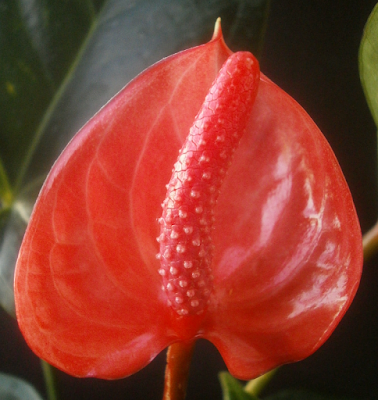 (L-R): 0115 Erlene Adopter, 0580 Marsha Marsha Marsha, 0586 Vera Special.
he offsets just as much as the rest of them, and his leaves do that weird thing where some of the smaller veins turn yellow for no discernible reason. 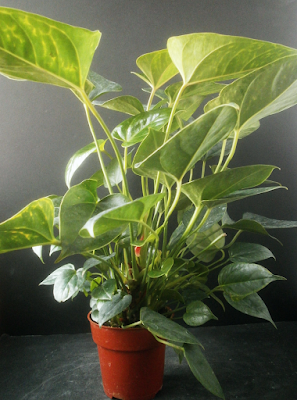 0581 Adam All, on 25 February 2016.
Theories regarding the yellow veining have been advanced, one at considerable length. I don't think that's the actual explanation,1 but I don't have an alternate theory that fits the facts. 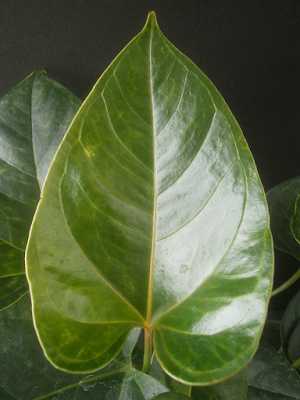 Hell, I don't even know for sure that this is a problem: on all the Erlenes to bloom so far, the leaves are huge and shiny, the blooms plentiful, and pests leave them alone (mostly).2 Not a lot of other seedlings I can say that about. Maybe I'm trying to pathologize a harmless idiosyncrasy. Maybe it's quirky. Maybe I have a manic pixie dream Anthurium on my hands.3 I suppose the odds are against it, but I can't prove that I don't. So.


1 It makes no sense to insist that my soil, water, and fertilizer are all so terrible that they've led to iron-deficient plants and the soil and water must be changed immediately, while at the same time ignoring the not-quite-1600 closely-related plants in exactly the same conditions which are not yellowing.
It also doesn't make any sense to insist that yellow veining on a green background is green veining on a yellow background. So I'm not sure making sense is a high priority.
It even might not ever make sense to propose iron deficiency in any Anthurium, considering that a study specifically set up to produce iron deficient-Anthuriums, by withholding it entirely from plants for four years, concluded:

Anthurium plants showed no deficiency symptoms from lack of iron. Plants were large and green and large flowers were produced regularly. Tissue Fe content (103.25 ppm) was similar to that of control tissues (105.25 ppm). Iron reserves in plants at the start of the experiment were apparently sufficient to maintain plant development. Alternatively, there may have been a source of Fe contamination in the experimental setup.

And my growers' guide (Griffith, Lynn P., Jr., Tropical Foliage Plants: A Grower's Guide, 1998, Ball Publishing, Batavia, IL, USA, pp. 12-13) uses that 1984 study as the basis for its own discussion of nutrient deficiencies in Anthuriums, suggesting that nobody had been able to induce it in subsequent experiments either. So how likely is it that I, who am deliberately adding iron to my plants every time I water, have plants with lower iron content than plants grown completely without any iron at all for four years? My feeling is that it's not very damned likely. You can tell me in English, French, Dutch, German, Spanish, Polish, and Italian that Anthuriums renounce calcium and all of its works (high calcium is known to impair iron uptake in some plants, so extremely hard, calcium-rich water could induce iron deficiencies in susceptible plants: this is a known, scientifically-supported thing), but that doesn't make iron my problem, it doesn't turn yellow veins green, and it doesn't explain why seven genetically identical plants are the only ones to show this symptom, out of hundreds.
I was more sympathetic to Pat the Plant's theory that it's a magnesium deficiency, as Anthuriums are known to need a lot of magnesium. The growers' guide:

If you tilt your head the right way, the yellow veining is plausibly "chlorotic bands moving in toward the midrib," but no amount of squinting is going to make those margins yellow, and the description of magnesium deficiency from the previously-quoted study doesn't match up with what I'm seeing at all:

In contrast, my plants are a very nice, dark green aside from these small veins, the margins are unaffected, plants and leaves both continue to get larger, and blooming is frequent, with decent-sized spathes.
I tried adding a small amount of Epsom salt (magnesium sulfate) to the fertilizer for a few weeks, on the theory that if the plants were magnesium-deficient, this would give them magnesium and the yellow veins would go away, and if hard water was making them iron-deficient, making the water even harder would make the problem worse. I didn't see any change in either direction, which means that 1) magnesium isn't the issue either, 2) I didn't add enough of it, 3) I didn't add it for a long enough period, or 4) there's some second factor to address, in addition to the magnesium.
2 I spot thrips in the photos often enough that I'm sure they're not leaving the plants alone entirely, but I'm not sure I've seen any actual thrips damage on the Erlenes.
3 (That would explain all the offsetting.)
Posted by mr_subjunctive at 3:00 AM

I quite like the yellow veins. Let me know if you ever offer this one for sale. I've never had an Anthurium & this is an attractive one to begin with.