The photos make this plant look a lot larger than it actually was. I was actually surprised by the size. 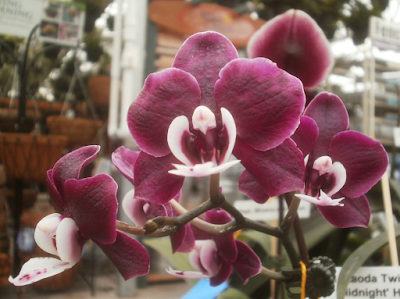 Last year's show had a Phalaenopsis Kaoda Twinkle as well, with no varietal name; this is probably not the same specimen as that one, but I wouldn't rule it out. 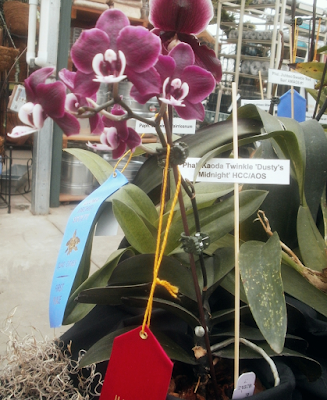 Don't really have much to add to this; in February I said it was one of the few Phalaenopsis I would actually want to have personally, and that remains the case. My track record with orchids is bad enough that I'm not actually trying to locate one (I'm actually pretty desperate to get rid of plants right now: I need more space for Anthurium and Schlumbergera seedlings and have nowhere to put them.), but I'd have a tough time turning one down if I saw a reasonably-priced one in a store.

Quite possible it is the same one and that since the last time you saw it, that particular plant received its clonal name.

So how big was it?

Well, I didn't measure, and my memory is unreliable, but combining what I remember and what the photo shows, I'm pretty certain the spike was less than 18 inches tall (including the height of the pot), probably closer to 12 inches.