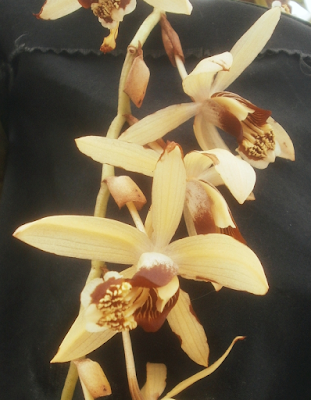 Coelogyne tomentosa was unusually difficult to photograph, largely because it was backlit by a greenhouse wall instead of a backdrop. The individual flower pictures came out passably well, because the pot was wrapped in black cloth,1 but the full-plant photo was bad, and even after working with it a lot, I could only clean it up partway. I'm including it anyway because the leaves are interesting. 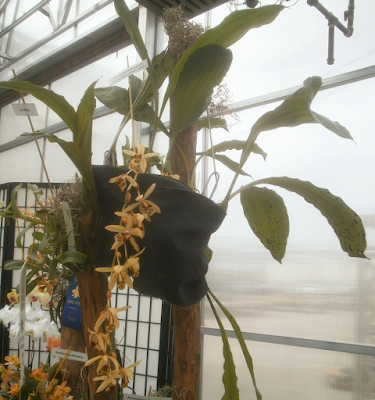 This was the first time I'd seen C. tomentosa at the show, and Kev's Orchids has an explanation why: the flowers bruise very easily, so they're very difficult to transport. (That link is also worthwhile for some much better photos of the species than I have.)

The species name is officially C. tomentosa, though it's still often sold as C. massangeana. I was happy to see the tag acknowledge this,

but disappointed that it did so while inserting a typo. Ah, well.


1 Are roots and pots considered unsightly now? Something that needs to be covered up? It's possible that I'm just late to notice, but it sure seems like I'm seeing a lot more references to top-dressing soil with decorative rocks / glass / sand / moss / etc. than I used to. Perhaps Pinterest is to blame.
Or is it maybe that C. tomentosa roots are as delicate and easily-damaged as the flowers, and the pot covering is protective?
Posted by mr_subjunctive at 3:00 AM

It is pretty standard practice at shows for pots to be covered with black cloth. Yes, it is largely due to the pots being considered unattractive as well as distracting (both from the blooms/plants and the overall display appearance).

I work at an arts and crafts store and our dyed mosses have been flying off the shelf. Definitely blaming Pinterest.