And now we have the first real second-generation Anthurium seedling.1 Herbie is the son of 0239 Russ Teanale, a nice reddish-pink / yellow; Russ's positive qualities mostly didn't get passed down to Herbie, alas. 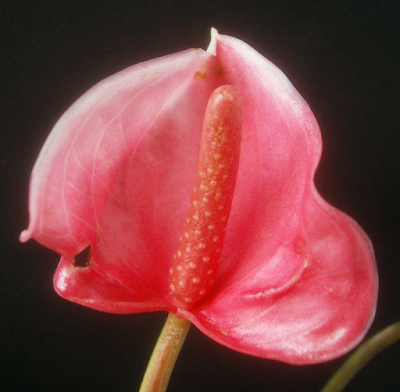 Herbie would be fine -- maybe not fantastic, but good enough to keep -- if not for the thrips. When the first spathe initially opened, it had a few little scars on it, and one smallish hole, which were both enough to distort the bloom's overall shape, but at least the spathe was a nice strong highlighter-pink color. Thrips damage got more severe as the bloom aged, though: 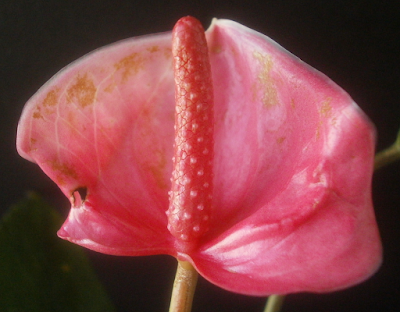 and the second bloom was pretty heavily scarred from the moment it opened, with a less intense color. 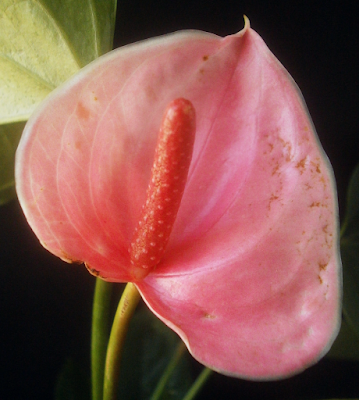 There's a third bud on it as I write this, but considering how the first two have gone, I don't have a lot of hope that number three will turn the whole thing around for Herbie. Prolific blooming is good, but if the thrips resistance isn't any better than this then it sort of cancels out. If you want a nice F2 seedling, you'll have to wait for another month, for 0805 Triana Hill. 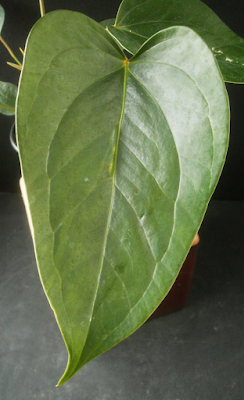 Herbie's foliage isn't terrible -- for whatever reason, the thrips have focused on the spathes and nearly ignored the leaves. 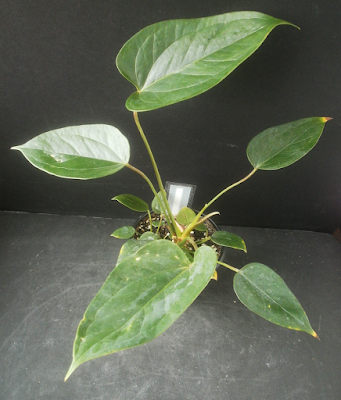 And there's something to be said for an early bloomer, too.2 On balance, Herbie's good enough to keep, but only just. We'll see how long that lasts.

[Multiple ragey paragraphs about the whole Orlando thing redacted; just read John Scalzi on the subject of "our thoughts and prayers are with the victims and their families during this difficult time."]

Speaking of doing easy things in lieu of making substantial changes: I've changed my Blogger avatar picture to a rainbow flag made out of Anthurium photos. 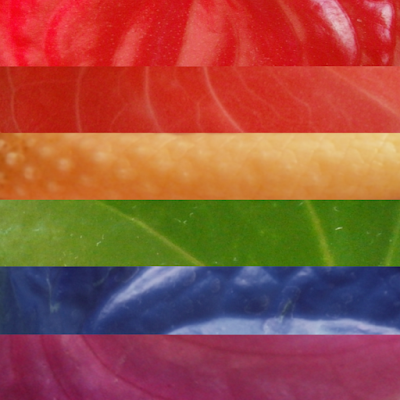 I had to cheat on the blue,3 because no part of any Anthurium I have is blue, but the other five bars are all slices taken from photos of a spathe (red, orange, purple), spadix (yellow), or leaf (green). The decision to do this has less to do with a desire to show support for the families and victims of the Orlando shooting (obviously I do support them, but this has no actual impact on their lives and they all have other things on their minds right now than how a plant breeder / blogger 1500 miles away feels about them) and more to do with this MetaFilter question, which reminded me that there have been times in my life when seeing a rainbow flag made me feel less alone. Times have changed since then, but obviously not quite enough. And then also it was an opportunity to play around with the Anthurium pictures.4

Changing my avatar doesn't make me feel significantly better, and it's no substitute for actually doing something. I suppose the next step is trying to contact my representatives in Congress about, you know, maybe passing some laws that would make it tougher for people to massacre crowds of people. I get angry just imagining the form letter Chuck Grassley will send me in response,5 so it may take some time for me to work up to that. I'll let you know.


1 Technically, 1038 Adlai Lowe, son of 0234 Ross Koz, was the first F2 to bloom, but Adlai was so strange, in so many different ways, that his first inflorescence doesn't quite count.
2 Herbie produced his first bud at 18 months old: not a record, but in the earliest 10% of all seedlings.
3 It's a photo of 'Florida,' with the blue and red channels swapped in Irfanview.
4 Though about half an hour after I finished, I realized that I should have used one of the Schlumbergeras for the orange stripe, as they make oranger oranges than the Anthuriums do. As it is, I don't think the red (I think from a photo of 0059 Bijoux Tuit) and orange (0031 Sylvester) are too close in hue to read as distinct stripes.
5 I've contacted his office before, in 2007 or 2008, though I can't remember what about. Reading between the lines a bit, his reply was basically, wow, you sure do feel strongly about this; congratulations for having strong feelings! However, Sen. Grassley is a lot smarter than you, and wants you to know that your letter will have no impact on the decision he eventually makes. Please sincerely fuck off, Sen. Chuck Grassley. Not an encouraging response, but I suppose that's probably intentional.
Posted by mr_subjunctive at 3:00 AM