Seedling 165 was actually one of the last Schlumbergeras to bloom this year, but three of the last five were magenta and I figured it would be good to spread them out a little instead of having a bunch of the last posts all be about more or less identical-looking seedlings. 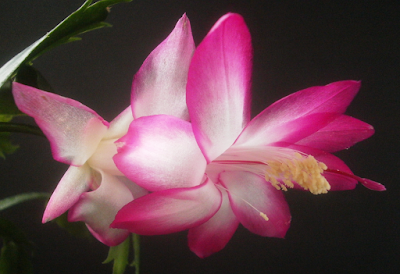 The problem with moving a seedling up many spaces in the post queue is that I hadn't yet come up with any possible names for it, and I had almost no time in which to try. I tried grabbing a list of random word combinations to see if that would get me something usable, and possibly it eventually would have, but I kind of ran out of time to deal with all of them. So I decided to pick some names related to significant people in my life1 and figure out which of them worked best for the seedling.

So, our finalists are: Assertive, In The Moment, Magic Words, Our Lady of Assumption, Some Clowns, and Swoss. 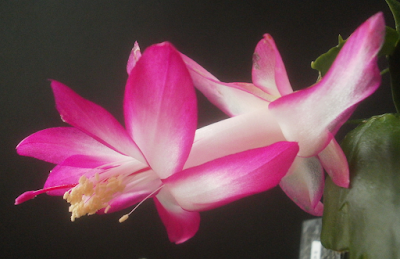 And Swoss is gone immediately, because the Urban Dictionary says it means either a blow job or (as a verb) to smoke a joint.2 The other five options are all pretty solid, though, which means I have to come up with dumb reasons to eliminate some of them. So:

I really like Some Clowns, both because the name appeals on its own and because it's a really good name for the person it honors. However, this isn't really a color I associate with clowns much; it might be better for a red-blooming seedling.

Not only is the seedling not especially magical, but I'm not completely sold on Magic Words for the person it honors. So that one can go. And while Our Lady of Assumption is perfect, perfect, perfect for its honoree, I feel like magenta's the wrong color for the name.3 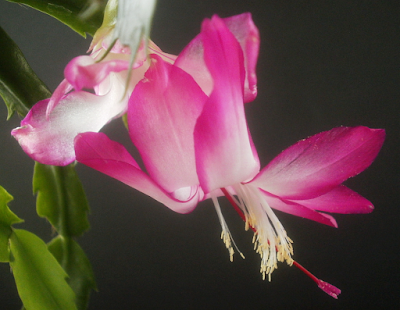 I just remembered to note that 165A Assertive is the first of three offspring of the NOID peach to get a blog post this year. One of the other two (167A) looks just like this, except maybe a little less frazzled; the other (042A) is peach. Just one more bit of evidence that Schlumbergera genetics is not really built to produce new color combinations, and beginning with a 'Caribbean Dancer' cross was ridiculously lucky. I would not have kept doing this if the first hundred seedlings had all been either magenta or peach.


1 I don't know if I need to be explaining this every time it comes up or not, but: for unknown reasons, it amuses me to occasionally name a seedling after a significant person from my life without actually using their name. (The ideal is actually to find a name that the person in question wouldn't even recognize as honoring them, though I don't always manage that.) So far, the seedlings honoring specific people from my life are: 023A Stoked, 075A Pushover, 082A Strawberry Madeleine, 095A Perturbed, 096A I'm Really Sorry, 101A Julius Erving, 180A Miss Emma, and 217A Blood Frenzy.
These sorts of names are especially appealing to me now, because, as I said earlier, I'm going through my old journals lately. People from my past are a lot more on my mind than usual.
2 As far as I was aware at the time, the person from whom I learned "swoss" had invented it themselves, like 20-25 years ago, and it was synonymous with "good" or "cool," nothing to do with sex or drugs at all. So now I have to come up with some other name to use for that person, which sucks because it was otherwise kind of perfect for them. Damn it.
3 As the name is, on its face, a reference to the Virgin Mary, it really belongs on a blue flower, but that's not going to happen with the Schlumbergeras. The next best option is white, so I'll consider it for seedling 290 in a couple months.
Posted by mr_subjunctive at 3:00 AM