Another seedling that produced only one flower. Also another white-blooming seedling. So this'll probably be quick. 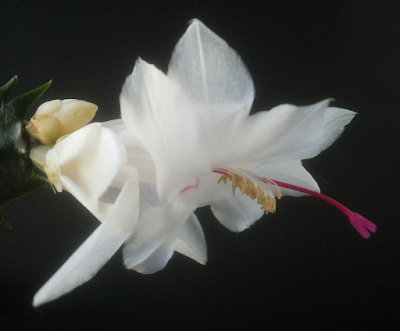 Not sure where Hesitant Disclosure came from; possibly a random word combination. It fits, though: as you can see from the photo, the flower either never completely opened, or opened at a point too late for photo-taking.1

Iceflow is another name suggested some time ago by Paul.

Lyle Lovett is the Grammy-winning country singer and songwriter. I kind of love his work,2 and every time I've ever seen him in interviews or tapes of live performances or whatever, he always comes across as grounded and humble, and goes out of his way, every single time, to acknowledge the people he performs with. He's been on my celebrities-I'd-like-to-hang-out-with-sometime list for a good 20 years or so now, and I live in constant dread of finding out that he's secretly horrible, because that would wreck me.3

Sloths Arrive Late is probably from a random word combination. It's also true. Like, if you invite any sloths to your party, tell them the party's beginning at least four hours before you want them to show up.

So. Of the four, Hesitant Disclosure is the most abstract and least appealing, so it's easy to drop. The remaining three, though, are a difficult decision. Iceflow and Lyle Lovett are color-appropriate;4 Lyle Lovett and Sloths Arrive Late are both emotionally appealing (the latter is at least sort of funny); Iceflow and Sloths Arrive Late are both safer than naming a seedling for an actual person.

There's a good chance I'm not going to wind up keeping the seedling anyway, since there are better white-bloomers around,5 so possibly it doesn't even matter in the long run. So maybe I should go with the joke and call this one 128A Sloths Arrive Late, leaving the more serious options open for later seedlings.


1 I can, of course, take pictures whenever I like, so there's no point when it's too late, exactly. There are periods when it's not worth it to bother, because photos taken when it's very dark outside are often no good for posting.
2 I've mentioned before that "North Dakota" is one of my top ten favorite songs of all time:


And the album on which it appears, Joshua Judges Ruth, would be great for the song titles alone, but then the songs are also pretty great. See "Church," "Since the Last Time," "Baltimore," "Family Reserve," "She's Leaving Me Because She Really Wants To," "Flyswatter/Ice Water Blues (Monte Trenckmann's Blues)."
Honestly, I could spend all day recommending Lyle Lovett songs; I ran into him at the perfect moment in my life to hear what he was saying, so a huge number of his songs are really important to me.
3 Not an exaggeration.
4 (White makes sense for Lyle Lovett because a disproportionate number of his official music videos are in black and white. Sloths tend to be more brown or gray; sometimes they even end up kind of green, because algae can grow on them.)
5 Mostly thinking of 193A Arcade Gannon, 283A Migaloo, and the still-unnamed 290A, but 119A There Would Be Peace, 127A Cooperating Banjos, and the unnamed 135A are decent as well.
This seedling, 133A (no name), and 190A Snezhana are all pretty much duds, though, unless they decide to be amazing next year.
Posted by mr_subjunctive at 3:00 AM

May i suggest Giselle or Myrtha for another white flower? These are both characters from the ballet giselle where spirits of rejected women (called wilis) curse any trespassing men to dance until they die (as you do in a ballet). Myrtha is the queen of the wilis and is stumped when giselle steps forward to protect a count from certain death. So these are 2 different characters for white flowers. I really enjoy your blog.