Question for the Hive Mind: Weird Philodendron hederaceum gets weirder

Not terribly long ago, I found an oddball Philodendron hederaceum in the grocery store, which had faint dark-green speckling on the leaves, most noticeably on the newest ones. It wasn't dramatic, but it was unusual, plus cheap, so I bought it. 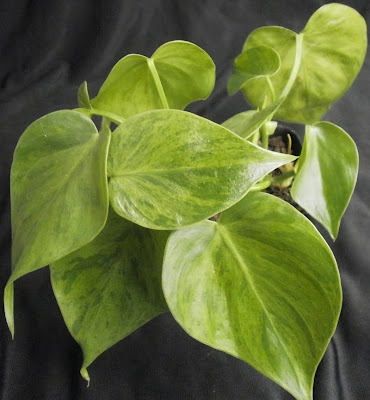 Then I kind of forgot about it for a while -- it was in a darkish spot in the husband's office, and it wasn't giving me any problems or doing anything very exciting, so I didn't have any particular reason to think about it much.

Then there was a rearrangement in the husband's office, and the plant got moved to a brighter spot, and it responded by producing new leaves, which was a bit more dramatic than the previous growth. (The leaves are too shiny to be able to get good pictures from; sorry.) 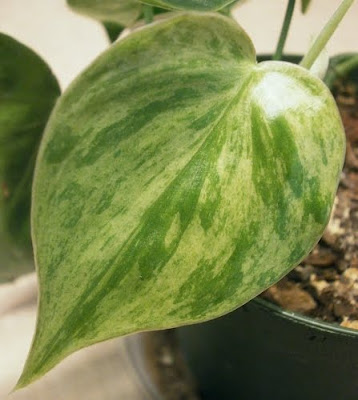 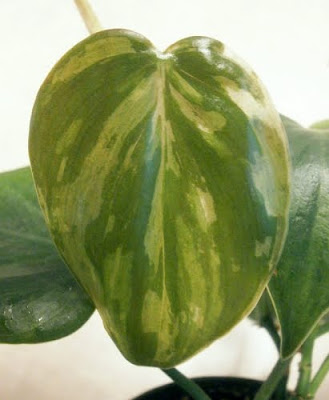 Which is all great and everything, but it leaves me wondering even harder what the hell it is I have. I was unable to find any varieties of P. hederaceum like this using Google, so I figure there are only four real possibilities here:

1. It really is a new thing, and I'm the first person to have seen one, which means I have discovered a new variety of Philodendron hederaceum and can now patent it and become rich. Which is not realistic because all indications are that the universe will never permit me to get rich. Plus, someone else obviously had it first, because it was like this when I bought it.

2. It's a newish, named, patented variety of P. hederaceum, which just hasn't shown up yet on-line, or I'm looking in the wrong places on Google, or whatever. Which is unrealistic because . . . how would you create a new variety of a plant without any pictures of it showing up on-line? Why wouldn't you tell anybody?

3. It's a really old, non-patented variety that nobody sells anymore, and I've never seen it anywhere before because when I did, I assumed it was Epipremnum aureum 'Marble Queen' and didn't give it a second look. Which is kind of implausible because . . . well, I can be unobservant, sure, and I can even be unobservant about plants, but that theory involves me being unobservant about plants for a length of time I consider implausible. If nothing else, I should have seen this variety when I was Googling around for the Philodendron hederaceum profile.

4. It's not a new variety or an old variety, but a regular P. hederaceum that's got a virus or nutrient deficiency or something. But that doesn't really work for me either, since the pattern of speckles is more or less the same as in Epipremnum aureum 'Marble Queen' and lots of other aroid cultivars. If 'Marble Queen' and the rest were because of a virus, I figure I'd have heard about it by now. And anyway it seems to be growing just fine, same as the other varieties I have. 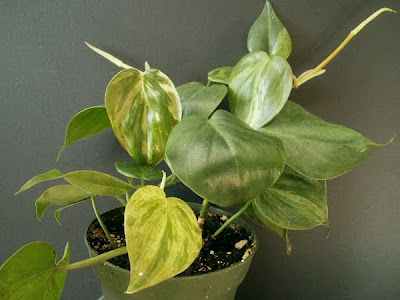 Can anybody out there explain this, suggest resources to check out, or at least tell me which of the possibilities above strikes them as most likely? I looked at the International Aroid Society's website for a list of possible cultivar names, but nothing useful turned up. (Because I'm not an IAS member?) If I have to, I suppose I can try to track down the wholesaler, by asking the grocery store where they get their plants, but I'm hoping it won't come to that. (I have a guess already, and dealt with them at the ex-job, and didn't like it.) So, um. Theories?

The local greenhouse here in Columbus Ohio has these most of the time. There doesn't seem to be a cultivar name on them. I asked about them once, and the woman that runs the greenhouse said that they were just an old variegated cultivar.She said she's grown them for several years now.

In my 9 years at the greenhouse I never saw a Philodendron that looked like that. I don't think it's a virus because the leaves aren't all distorted and stuff. You could always try infecting a plain green one and see if it transfers? That's what we did in class if we wanted a cheap (and admittedly not entirely accurate) way to see if we had a virus. Either way getting a patent is a pain in the ass and I unfortunately doubt you'd make much off of this guy.

I remember seeing this (or a very similar) cultivar on several occasions, always without a name. I think it's true genetic variegation; I've seen several other genera, including aroids, that respond to increased light with increased variegation. (I've always intended to investigate more why some increase and some decrease, but that's another subject.) I'd expect viral variegation to be more or less the same regardless of light, and maybe a little sloppier. Various mosaic viruses will do that. (They usually won't distort plant parts, but will reduce vigor.) I also suspect that P. hederaceum may be a little unstable (or is it just that I watched "Grey Gardens" last night?) and occasionally variegates just because. Big help, huh?

I searched for "philodendron with variegated leaves" and, amazingly enough, found a picture from an earlier blog post of PATSP! Maybe I'm being totally blind here, but photo #2 in this post looks a whole lot like the left-hand panel of the photograph under point 3 in your post from March 5, 2009, "Epipremnum or philodendron?" Could it be the same kind of plant has captured your fancy twice? (Ah, the lure of mystery...)

This variegation is caused by tissue culture.
These strange leaves are the equivalent of P.hederaceum 'Brasil' making pure yellow or near pure yellow, wavy, spade shaped leaves.

It is nothing new, and most likely as the plant grows larger over many years will wear off, just as the 'Brasil' becomes mostly green as it climbs.

I am an IAS member, I think that the cultivar database needs more pictures.

The photo in the "Epipremnum or Philodendron" post you're talking about is an Epipremnum, though. That's the variety 'Marble Queen' that I was talking about in this post.

Whatever it is, it's neat. And I'm jealous!

i hardly know anything botanical etc but that plant is very common where I am, even the leaves with the yellow and green markings.

I myself prefer the dark green leaves with no yellow markings.

You're thinking of Epipremnum aureum. It's very similar, and one of the most common varieties ('Marble Queen') looks a lot like the plant I'm talking about in the post, but it's not actually the same: I have a post about the differences.

I think Steve Lucas, from ExoticRainforest.com might be able to help you. ;-)