Partly/mostly inspired by the smallish papaya tree at the Quad City Botanical Center, we bought a papaya in mid December, and I scooped out a bunch of seeds and planted them to see how that would go. (The husband ate the papaya. It turns out that I don't like them very much -- not the flavor, the texture.) I planted 144 seeds on 14 December, which seemed like overkill even at the time, but I could have done two or three times that many: papayas have a lot of seeds. 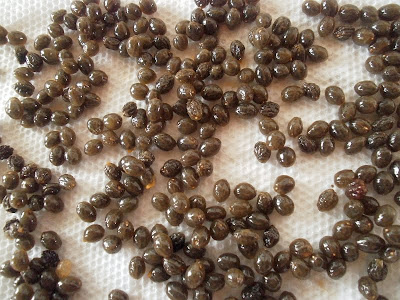 Some of the seeds, after they'd been removed and cleaned up.
Then I put the flat on the back of a light fixture down in the basement, for the bottom heat. The first seedling popped up after just nine days, on 23 December. 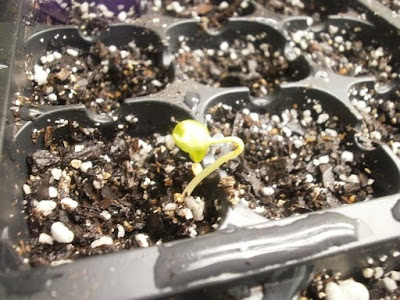 Since then, at last count, twenty-two more have sprouted. I'm a little surprised it's not more than that, but I suppose they don't want to seem eager. Or possibly they're disappointed with the light. In any case, more are coming along every time I check, and I already have more of them than I'll know what to do with, once they're transplanted to pots.

I'm not actually sure what to do with them at that point, though. Are they difficult to grow indoors? Anybody who's tried this have some tips?

Food and light and warmth is all I remember about how I treated mine. No pests that I remember. Normal houseplant compost. Normal room humidity, no spraying. They should grow very fast.

I hate the texture as well. I even forced myself to try some when they marketed them as "Imported by Air - actually properly ripe, not like the crap we sold you last week". The babaco is a totally different beast, one of the most exquisite fruit in the world.

They're really easy. They're not too picky about fertilizer, they like a lot of light but I've not had trouble with them getting a bit less (like east/west window) and they don't like standing water. All in all a pretty generic plant in terms of care.

Papaya Leaf is also edible. Its extremely... I cant stress this enough, EXTREMELY bitter, moreso than bitter melon if you ever try one.

Unfortunately, there is no guarantee that you will get good fruit from this plant. For that you would need a cutting from the original stock. Chances are you weren't trying to get home-grown papayas in Iowa anyway :)

My parents have had some in their garden in Mexico. They don't require much fussig about, as far as I understand; just a lot of sun, some water but no puddles. They can get to be quite tall, though. They usually give beautiful flowers, but getting good fruit is not easy. It's either small or eaten by birds!