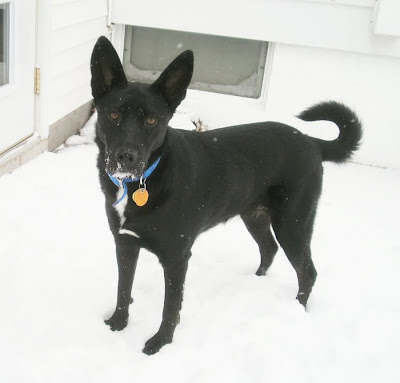 Oy. Not my best week. Stupid Google. (Though: without Google, this blog wouldn't exist at all, so that complicates the emotions.)

On the up side, we got snow on Monday and Tuesday. Not very much, and it came with a blast of cold, but any snow is good snow as far as I'm concerned. I probably do need to work on my ice fort / igloo / ice wall / whatever this coming week if I'm going to build one. So far, I've been having trouble coming up with an appropriately-sized, smooth, rectangular or cylindrical container in which to freeze the water: it's not hard to find something of the right size, but it is difficult to find something resilient enough not to crack after the water in it expands. (Ideally, I'd also need lots of identical containers, in order to build as fast as I could.) And the container would have to be something we have already. I'm looking into plastic clamshell containers like I use for Begonia propagation, because I have a lot of them saved up and don't care if they're ruined, but they're still problematic because they're not very deep: I'd wind up with a lot of wide but short blocks. We'll see how it goes, I suppose.

The photo for this post isn't from the most recent snowfall, but pictures of snow all tend to look the same anyway. Sheba's expression here is roughly the same as the expression I had in the Times article (I only have about five decent fake smiles in me on any particular occasion, and the picture they went with was shot number 25 or so), which makes me wonder if there isn't something to the observation about people looking like their pets.

I'm looking forward to whatever wonderful creations you make in the yard - I miss snow!

If there's enough snow, build the containers you need from it. Stamp a hole in the snow, put a plastic bag big enough in it, stick some sticks to the handles to keep it put, fill with water and let it freeze.

how about plastic bags filled with water? And you could partially fill them with snow to jump start the freezing.