Paphiopedilum Winston Churchill (seed parent for Paph. Winwine) must be a magical paph to breed with, because it seems like he's everywhere.

And that's just so far. There'll be a fifth Winston Churchill cross in the 25 December post. Not sure if there are others. Probably. Lots of Paphiopedilums this year. 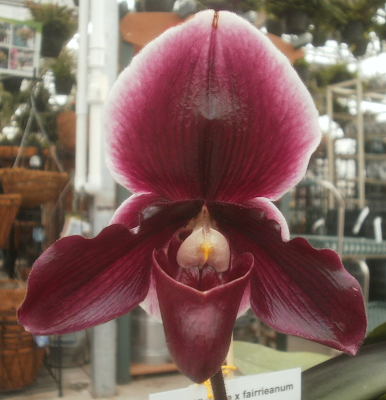 Not really seeing the influence here, but then this plant is only 1/4 Winston Churchill, so I suppose I wouldn't necessarily. I'm more surprised that it doesn't especially resemble the pollen parent, Paph. fairrieanum, which is fairly light-colored, with purple and/or green veining. There were a lot of fairrieanum hybrids in the show this year, it seemed like (you'll see two more this year), and none of them particularly resembled it, nor have the fairrieanum hybrids from past shows: 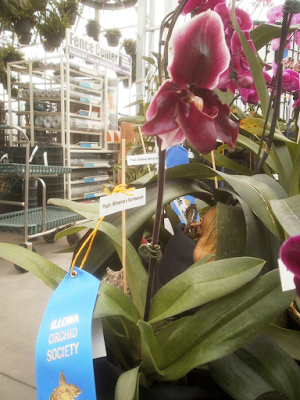 I mean, yeah, recessive, dominant, Punnett squares, I get it. It's just that usually there's enough of a resemblance to be able to say oh, yeah, that kind of makes sense, I guess, and with this particular plant there's not.

Wherever it comes from, it's lovely, and I approve of it.