How to Deal With Plants Which Have Been Chilled

I occasionally get e-mails from people who want to know what to do for plants that have been accidentally exposed to too-cold temperatures. Maybe they've picked up a plant that was abandoned next to a dumpster in a snowstorm, maybe they forgot to bring it in off the porch in the fall, that sort of thing. And it's occurred to me that I didn't already have a post about this, so maybe it would be worth writing one, since whenever I'm asked I wind up having to write a whole big thing from scratch.

The problem is, there's very little to say about this situation. There is no special fertilizer you can apply to reverse cold damage, and keeping the plant extra-warm for a while isn't going to help either. You pretty much just have to give the plant whatever care it would ordinarily prefer (or maybe slightly drier than it would usually prefer, if you think there may be root damage) and wait to see what it does. Sometimes plants will surprise you: I had a jade plant (Crassula ovata) once that was accidentally left outside, in Iowa, through I think mid- to late December. It was covered in snow when I saw it and brought it in, but it recovered and went on for several more years anyway. 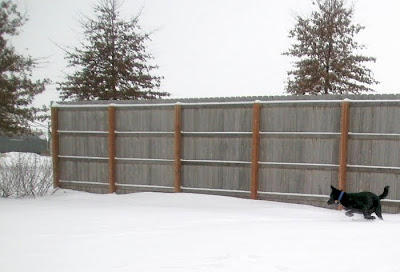 I didn't have any plant photos of plants being exposed to cold, but I did have a photo of a dog being exposed to cold. I figure since there was no Sheba/Nina picture on Saturday because of hiatus, probably nobody would mind a late one.
Even in situations where it's clear the plant has been badly damaged, cold usually harms the extremities -- the tips of branches, the topmost leaves -- most severely. So, one can often just cut branches back to undamaged tissue and the plant will sprout new growth. (The resultant plant won't be as big and pretty as it was, but given enough time, it can come back.) Also anything that's obviously dead (black, crispy, mushy) can be cut off: whether it's an aesthetic improvement or not, those parts weren't going to spring back to life anyway, so you might as well.

Aside from those few things, though, mostly you just have to wait and see how bad it's going to be. And, obviously, not do it again. Within two or three months (probably sooner), whatever is going to happen will have happened, and you can decide what to do from there.

It should be mentioned that you shouldn't warm a plant up quickly. More damage can be done if you put it directly into a very warm room. It should be defrosted over the course of about 12 hours, if possible.

You didn't mention buying from a florist that keeps its tropical houseplants on the pavement (sidewalk) in December.

Glycine betaine has shown some effect in plants that have suffered trauma from frost, drought, heat, too much light, etc. I don't know of any commercial formulations for this purpose available to the amateur gardener. There is a lot of it in Canna Bio Vega organic nutrient available from any good "hydroponics" supplies shop, though it is for growing in soil. This is an off-label use but it can be used as a foliar feed, if the plant has leaves left. Otherwise feed and spray what you can.

If you get the pure compound (available from health food stores in capsules) a solution of about 1% is recommended for foliar feeding.

The best results would be from treating the plant before the cold or other stress but that would be unlikely.

I know someone who left a staghorn fern out through the coldest weather we get here in Austin (~17F), which is far too cold for this fern. She had left it on a porch with a roof, and so it didn't get rain, snow, or sleet on it. She brought it in when she got home, and it's been recovering for the past year. If it had been watered or rained on, it would have been a goner.

If I have to rehab cold-beaten plants, I remove all dead or even unhealthy growth then treat them like cuttings: humidity tent, indirect but bright light, and a light misting of seaweed solution. It doesn't work for all, but it seems to do ok for the more common and quick-growing houseplants, like the spider plant or pothos.

Seconding Pat's "don't warm up quickly" comment - this is also what we were taught at vocational school. I don't remember the reasoning behind it, if we were ever told (there's nothing in my notes).

I am actually in the process of rescuing a nice variant of the philodendron family from a doctor's office where it nearly froze through. Some of the leaves hung on for a couple of weeks, but the roots are definitely gone - water is not passed up the stalk to the leaves, they just hang limply. In this case, the type of plant is so full of stem activity that I chose to snap them all off and put them in water. After four days, the leaves have perked back up. I am hoping for new root growth along the stems.

I would add (although the article already implies much of this):

1. Water very carefully until you know whether the plant still has roots. (Also, winter-dormant plants will probably need MUCH less water, if any.) A plant will usually demonstrate healthy roots by initiating new growth (though that's not a guarantee; see the PATSP post about the zombie Crassula muscosa).

The point is, watering a plant with large sections of dead roots is a recipe for fungus or other rot, which will destroy more roots and threaten the entire plant. Pay close attention to whether the plant is taking up the water you give it.

2. If the plant is not taking up water or shows other signs it has lost its roots (like a little aloe on my deck showed me today), de-pot it. Cut away any blackened bits of root or stem. You may need to re-pot in a smaller container to fit the diminished roots. In extreme cases, you may need to treat the entire plant as a cutting and attempt to re-root it.

If the roots are severely reduced, you may also want to prune the above-ground portion of the plant.

I've got some test pots on the 'will they come back' list.

We're heading into a record low tonight and I was unable to bring in all the aloes I've got potted up.