It's a lot easier to define the word epiphyte than it is to provide examples. The reason is that epiphyte is less a type of plant than it is a lifestyle, and with lifestyles, one can dabble, or one can commit. The line between regular plants and epiphytes, therefore, is kind of fuzzy.

But first things second. What epiphytes actually are, are plants that grow on other plants, generally trees. (Epi - on or above; phyte - plant) They're not parasites: they don't steal nutrients or directly harm the plant they grow on. They may get large enough to break branches off, but that's an accident, and doesn't serve the epiphyte's needs any more than it serves the host. There are a few sinister epiphytes that begin development growing on branches or trunks but eventually outgrow, overwhelm, and kill their host, notably the "strangler figs" like Ficus aurea.

A lot of the aroid epiphytes (Anthurium, Monstera, Philodendron) can either begin life on a tree branch and eventually drop roots down to the ground (primary epiphytes) or begin life on the ground and crawl until they find a tree to climb (secondary epiphytes). Either type of plant is sometimes called a hemiepiphyte. (hemi - half, partial) Some other plants can grow either terrestrially (in the ground) or as epiphytes, depending on where they find themselves, but any individual plant picks one or the other spot and sticks with it. On the other hand, some epiphytes are unable to live terrestrially, and either find themselves a branch as a seedling or they die.

Epiphytes are over-represented in the houseplant world. I suspect the main explanation for this is that epiphytes are naturally adapted to shade, so they adjust better to the lower light levels found in the home. The most common groups of epiphytic houseplants are found in the aroid, bromeliad, cactus, and orchid families.

The list that follows is far from exhaustive; I was kind of in a hurry. (This post is partly so I can be eligible for an epiphyte-centric plant giveaway Steve Asbell is doing; details on how to enter are at his post here.) I'll certainly add other plants if anybody wants to suggest some. 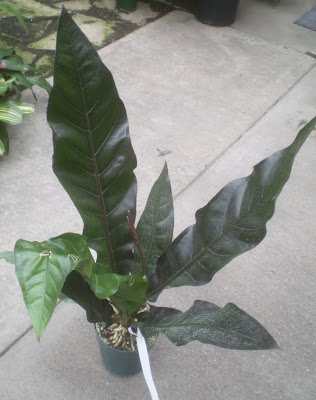 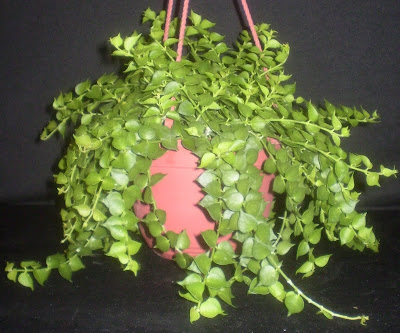 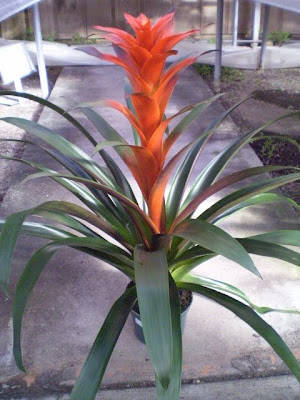 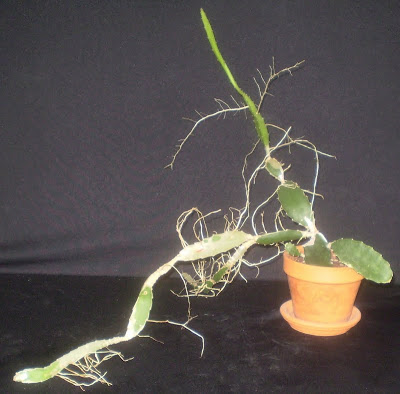 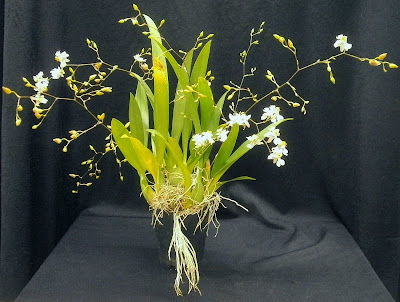 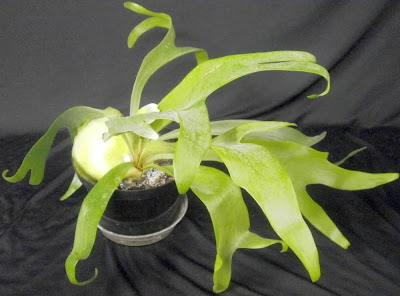 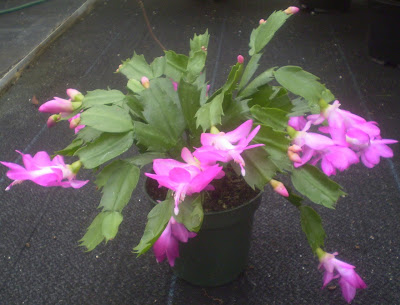 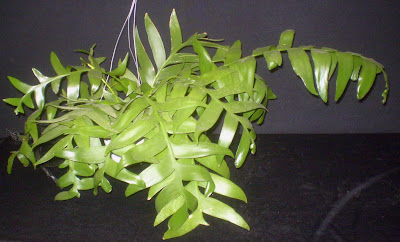 I haven't grown some of the plants in this list (Anthurium, Tillandsia), and one I haven't had for very long (Oncidium), so I'm not sure the recommendations and anti-recommendations are going to be all that useful, but we'll try.

I'm a big fan of Schlumbergeras. They have slightly quirky needs, but they're less complicated than I'd been led to believe, the flowers are really pretty, and the plants can last forever.

Dischidia ruscifolia doesn't do a whole lot, but as far as I can tell, they're easy to keep happy.

Aechmea fasciata should be available a lot more often than it is, because it's a very nice plant, even when it's not flowering. I find them very easy to care for, too, which helps.

(I also suspect that I would probably like Tillandsia xerographica if I got to know it, but they're rarely available here, and when they are available, they're really expensive. So I don't have one yet.)

For the anti-recommend, I'd have to go with Anthurium x 'Marie,' even though I haven't actually grown it, because I've grown a couple other foliage Anthuriums and it hasn't worked out. They're not hard to keep alive, but they need a lot more light than I can provide: without it, the leaves get either enormous and thin (A. "hookeri") or small and twisted (A. podophyllum), and neither one looks particularly good. (I haven't had a good time with my Platycerium either, but I'm not sure which of us is more to blame for that, so they might work out fine for other people and I won't discourage you from trying one.)

All epiphytic plants have certain expectations for what kind of material they're going to find around their roots, and sometimes if you have trouble with an epiphyte, the soil is the problem, not you or the plant. I've recently started adding coarse, unchopped sphagnum moss to the potting mix I usually use, in about a 1:1 ratio, for my Anthurium andraeanums and bromeliads, and it seems to have made a world of difference there. (This may be why the Platycerium hasn't worked out: for it, I used the straight potting mix, with no modification, which is possibly too heavy.) Orchids are typically grown in mixed chunky pieces of bark but are sometimes also grown in 100% coarse sphagnum. For a lot of the epiphytic cacti, my regular potting mix seems to be okay with no modification most of the time.

The one that I always find strange (not a houseplant, obviously) is the elder (Sambucus nigra). I see quite a few halfway up trees, in gutters, anywhere there is a tiny pocket of soil.

I think Cryptanthus are terrestrials. Google gives conflicting assessments, though, and they seem to do best in a sphagnum-heavy potting mix, so I'm uncertain.

Now... among folks like me who love cactus and succulents, I will say that the fans of epiphytes are a smaller crowd. But I am still excited by the topic of your post, because even for us fans of xeric plants, some succulent epiphytes are just too cool to ignore.

That is, I want to contribute, but one nice problem is that your article covers most of the ones I like already. Well done!

Here are a couple more: from the Cactaceae, Lepismium (epiphytic cactus along the lines of Hatiora, Rhipsalis or Pseudorhipsalis, which the article covers already). I grow L houlletiana (sometimes grouped under Rhipsalis) and I love the sawtooth edge.

I'd also add a couple of my favorite epiphyte or lithophyte orchid genera, Myrmecophilia (I grow tibicinus) and its sister genus, Schomburgkia.

You were in a hurry? This post is thorough enough that I learned a ton... I think I was mostly aware of tillandsia and orchids. ;)

Your Eucharis grandiflora post would be a wonderful addition to the latest issue of How to Find Great Plants. If you're interested, the deadline is December 31st and this link explains how to enter:

Hey love this article. I'm a budding new epiphyte addict. Got 37 epiphytic cacti, 24 Hoyas and 1 epiphytic anthurium. Looking to expand some more especially on the epiphytic Hippeastrums. That is very interesting. Didn't know bulbs as epiphytes as possible lol. Thanks :)