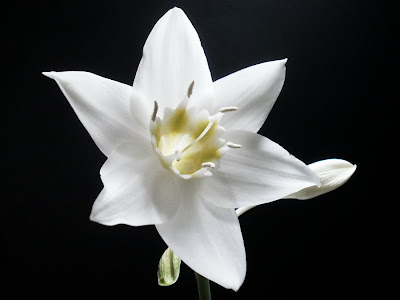 We had sort of a good flower / evil flower thing going on here on Christmas Day. The good flower was, of course, Eucharis grandiflora, which I first noticed was blooming around the beginning of December. It eventually produced a scape (flowering stem) with four buds on it. The first of those opened on 20 December, and the fourth one opened on Christmas. (The evil flower is the subject of tomorrow's post; I'm not going to spoil the surprise.) Which as far as it goes, the buds are fairly ornamental in their own right: 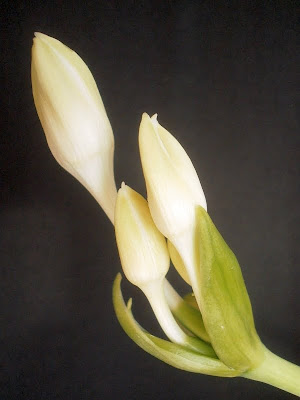 The smell changes with the time of day, which might be the flowers and might be me. I'm not sure. But at least some of the time, the scent reminds me of a Gardenia, sitting on a table, which has just been dusted with Lemon Pledge: mostly a gardenia smell, but with a bit of something sharper and more citrusy. It's possibly the very best scent in the entire world. At other moments, Eucharis has a heavier, more perfumey smell, which I don't like so much. 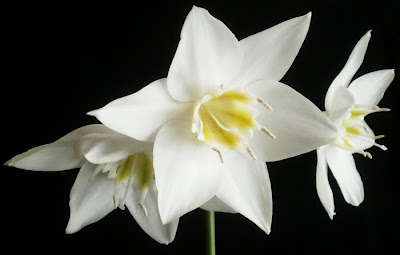 One good and bad thing: the scape wasn't really strong enough to hold the flowers upright. It was good because the plant's on a high shelf already, and having the flowers standing straight up would have put them out of smellable range, but it was bad because the photos of the whole plant looked goofy. Eventually I had to tie the scape to a bamboo rod in order to get a whole-plant picture: 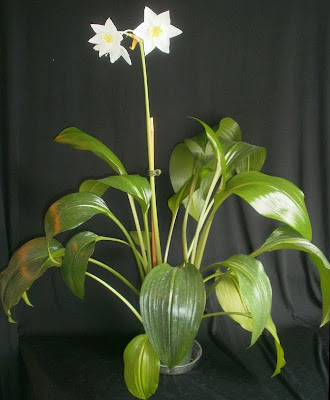 Unfortunately, particular flowers don't last very long: the one that opened on 20 December had begun to wither by 26 December, so it's a brief show. I still can't complain about the plant, though: it's been remarkably easy to take care of so far (and I've had mine since January 2009, almost two years), and I really like it as a foliage plant even when it isn't blooming. Plus, even if the show is brief, it could happen again in a few months, if I can figure out how to make it happen again. 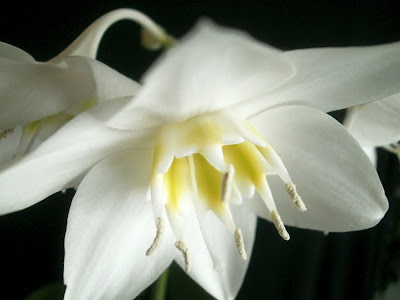 Very pretty, and now I kinda want it for the scent. Is it in a 6" pot? The pot looks so small compared to the plant as a whole. Very nice!

I've been very surprised at how rare they are in stores here: the only place I've ever seen one for sale is the ex-job. That's maybe because the flowers are too short-lived to ship well. (By the time you identified a bud, sleeved and boxed the plants, drove them wherever they were going, unboxed them, priced them, and put them out, the show could be over already. Even if it wasn't over, there'd be a very short sales window: this particular scape is already 3/4 over, ten days after the first flower opened.) But even without the flowers, they're pretty cool plants, in a peace lily kind of way.

I've never seen one of those in Albuquerque, so thanks for sharing yours!

Is the evil plant of tomorrow smelly? Amorphophallus? I can't wait...

Very cool. I haven't thought to look for a scent any of the times I've seen one blooming but your description sounds really nice.

And I have an Eucharis, but it blooms in summer. In july. This happened in the past three years. But only once a year. The perfume is there but I do not know recognize the scent.
When I saw your picture, I thought: the pot is so small. Mine has 4 inch in diameter.
But blooms only once a year, as well.
PS
You have a very interesting blog with lots of information.
Happy New Year !

Maaaaaybe it is, and maybe it isn't.

It's not Amorphophallus, though. I don't have one.

Lovely, and scented too. I must try to remember that my windowsill is already planned for completely.

A tip for people looking for one: they are bulbous plants, and sometimes nurseries which carry exotic bulbs will have them (as bulbs.) The bulbs don't require any forcing or other special care, and sprout easily enough.

And, for folks who are nervous about having full-sized plants shipped, mail order is usually easier and cheaper if you order bulbs.