As promised yesterday, today we have the "evil" flower. It's not actually evil, of course, but . . . well, you wouldn't know that from the smell. Especially by contrast with yesterday's Eucharis.

By the time I noticed the bud, it was already pretty well-developed. (I've seen a lot of buds get started but then drop off before developing fully, so it's possible I'd seen it earlier but just assumed nothing was going to happen.) This was taken on 22 December: 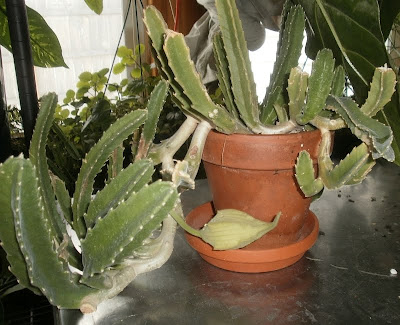 And by 25 December, it had opened. (Technically, I didn't notice until 26 December, but it certainly could have been 25 December, because I didn't check, and it's in a spot where I can't see the flower without going a bit out of my way to try. Plus, it's a lot more poetic to say that the fourth Eucharis bloom and the Stapelia both opened on the same day. One looks like the Star of Bethlehem, the other smells like a manger -- I guess I should be looking for a wooly, sheep-like flower to stand in for the shepherds, for next year. Can't actually think of one right now, but I know there must be some somewhere.) 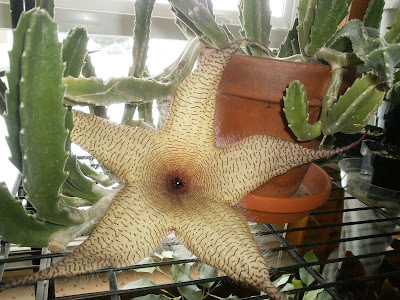 This isn't really the ideal time for a Stapelia bloom, obviously, because they smell like dog shit and we can't open the windows. Fortunately, it's only the one flower, and the smell isn't that strong: I have to be pretty close in order to detect it, so it's not really a big deal. It's also unlikely to last very long: I think the previous flower from last April (which had better pictures, by the way) was only around for about a week. So I'm not unhappy about this.

Look to the cacti for your sheep.

I suppose if it really starts to get obnoxious, you can always remove the bloom even if the novelty of the plant is in the stench. Also, although I cannot prove it, I had a hunch it would be a Stapelia.

Speaking of stinky plants, my sister used to give paperwhites as Christmas presents until she had a few leftover one year. She potted them and came downstairs one day wondering where the hell that stink was coming from. When she saw it was the paperwhites, she switched to amaryllis.

Those flowers are edible as well. So if you get tired of the smell you can just eat them raw. The rest of the plant is medicinal against pain and hysteria and is purgative and emetic.

The common name is tililolomncane.

Did you know it has been discovered that the different stapeliads have very specific smells to attract particular species of flies? Some mimic rotting flesh, rotting fish, faeces (in carnivore, omnivore and herbivore flavours) or decaying urine.

Stapelia gigantea flowers are considerably worse, in my opinion, than Gynura aurantiaca flowers. It depends, I suppose, on how you feel about the smell of dog shit.

It's only obnoxious if I'm close (within about 12 in / 30 cm). Further away than that, and I can't actually smell it at all.

Neglected to mention in the original post that Sheba found it really interesting when I brought it down to her level. Much heavy sniffing, followed by a pause, then more heavy sniffing. Then when I tried to take it away, she continued to follow it with her nose as far as she could reach.

I suppose I can see the appeal of paperwhites in theory, but yeah, I find the smell objectionable enough that I don't think I'll ever try forcing them myself.

I simply think the form of that flower is pretty spooky and amazing, quite independent of its carnivore scat smell.

This year a plant friend gave me a cutting I believe is also Stapelia gigantea. On my back porch, it's tripled or quadrupled in size since then, growing from a single large stem to large clump of maybe a dozen stems.

Mine hasn't flowered yet. I hope it flowers soon like yours! Given Sheba's reaction, when ours does flower, I'll have to show it to our resident carnivores, Leenah Dog and Dezmond Dog, to see how they react.

Your Stapelia looks much happier than mine. Mine is still recovering from last years winter. This year I had enough intelligence to bring it in to a sunny window. We'll see if this is a year of recovery for it.

That said, I'm a little dismayed it blooms in winter. Ah, well.