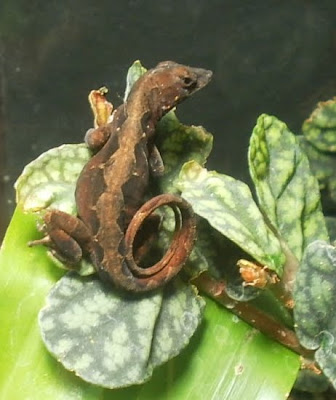 Since Sheba's been getting all the photos lately. I don't have much to say about this one, though. It's hard to get pictures of Nina doing anything new, and, sadly, for the time being it looks like she's not going to get a change of scenery either.

I am yet again, or still, discouraged about the new-terrarium thing. It turns out that the Mr. Clean Magic Eraser actually scratches the glass, and that was the last thing I was going to try before giving up, I'd said. I guess I didn't mean this, because I'm not ruling out baking soda, lemon juice, Bon Ami, Bartender's Friend, steel wool, strong acids, strong bases, and the various other things that have been suggested at some point, but optimism is feeling less and less justified.

Also the Adiantum has died, or if it isn't actually dead, it's significantly less pretty. They do love their water, Adiantums do.

In other news, I was apparently looking extra hard at things on Christmas Day, because my glasses broke around 7 PM. The bridge was constructed weirdly, and it just kind of . . . pulled apart, in such a way that it couldn't be put back together. And then three hours after that, my computer monitor made a funny little *pop* sound and all the pictures went away.

Both these problems have since been at least partly resolved: I got new glasses on Monday, and we had a spare computer monitor, which we'd been using in conjunction with the spare computer to watch Hulu, so now we watch Hulu on the husband's laptop instead. But still. I was scared to open my eyes for a while last week, lest I kill again. First I can control the weather, now I'm destroying things with my eyes --

HOLY CRAP I'M TURNING INTO THE X-MEN. All of them. Simultaneously. Yikes. (Maybe teleportation comes next? I wonder if there's an X-Man who's special power is glass-cleaning. . . .)

Fabulous picture of Nina! What a gorgeous tail!

Wolverine? Those adamantium claws must be able to scrape the glass clean.

Mr._S, your posts are a great read! I actually contacted 3M about scrubbers that don't scratch glass; I have my own aquarium that I'd like to get presentable, too. They recommended the blue, not the green. I've been using green all this time, but perhaps all my glasses, for eyes and for drinking, are already scratched and I simply can't tell. Maybe all the $ you've handed over for cleaning agents should simply be invested in a spanking clean, new aquarium? Storm, Cyclops,... er, Daddy Warbucks?

Hopefully you'll use your powers for good not evil.

I don't recall if there was anything super-special about the tank you had for Nina, but if not, toss it. There are innumerable people who tried to have an aquarium and failed and are trying to get rid of tanks.

Very little has actually been spent on cleaning agents so far; mostly I've been working with things we had already.

We're nearly at the point of wanting to just buy a new one, but new aquariums are expensive, even without lids and lights and so forth. As Anonymous says, there are a lot of used ones out there, so it may be worthwhile to keep an eye out, but even then, they may or may not be cheap. So I don't know.

An amazing photo of Nina! Love it. Happy New Year to all of you.

Looks like Nina was in a photogenic mood. And it sounds like 2010 was taking a couple of last swipes at you, too. I'm hoping 2011 wants to be a nice year (maybe trying for Student Body President.) Sorry the vivarium isn't going so well; short of replacing the glass, just moving on sounds attractive. What if you placed an ad for a used aquarium - what you want and how much you'll pay? Then you could use this one for propagating, quarantine, or a plant ICU.