Initially pretty happy about Willam. The bloom photographed beautifully after it first opened: 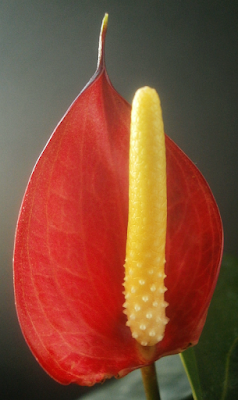 and the leaves are very nice. 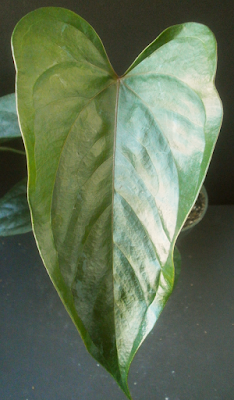 The plant as a whole has a tendency to fall over, but that could probably be fixed with some potting soil in the right places. 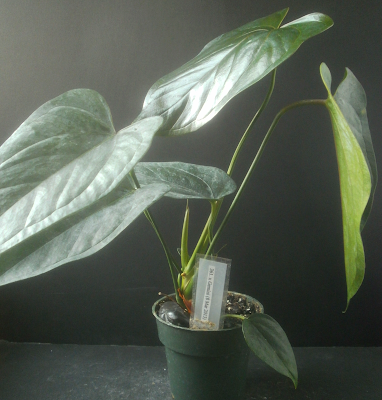 So you'd think I'd be happy with Willam, but: after the initial really nice bloom, the spathe flipped backward so hard that it all but folded itself in half. Not really what I was looking for. 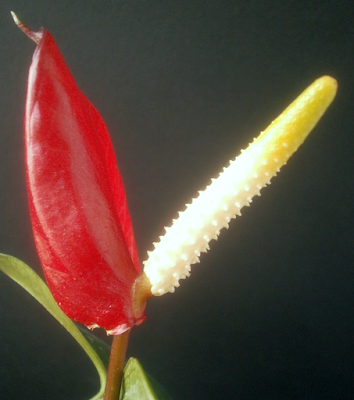 This doesn't illustrate the folded-in-half problem very well, but it was the only photo I got that was even slightly in focus.
I think it's worth waiting for a couple more blooms, to see whether this is inherent or accidental. (And even when it's inherent, the plant can still be worthwhile: hell, 0234 "Ross Koz" does this a lot as well, and it's one of my favorite seedlings. Though it seems to fold its spathes more at some times of year than others.) Officially undecided, pending another bloom. 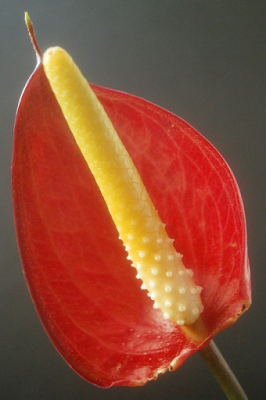 There's been another purge: I decided to go ahead and get rid of five seedlings for being generally crappy,1 plus the scale situations on 0205 "Venus D-Lite" and 0267 "Natalie Attired" became hopeless, so those two were sacrificed for the good of the other seedlings.2 And I got sick of the long internodes on 0232 "Rhoda Badcek" and 0235 "Rowan DeBoate" getting tangled in one another, and everything else, so they're gone too. Way too much hassle for mediocre pink/pinks, even if they were early-blooming mediocre pink/pinks.

I have realized just how big of a project trying to tape all the leaves on all the Anthuriums really is, and am overwhelmed. The basic idea still seems good, but I'd initially thought I would be able to tape all of them, like, once a week or so, until the bugs were all gone, and then I actually tried it and it took me about an hour to do a dozen 6-inch plants. Which extrapolates to something like 24 full hours of work, every week. Obviously that's not happening. So: still planning to tape them all, but for the moment, I'm focusing on 1) trying to get all the plants completely taped at least once (progress so far: somewhere between 5 and 10 percent complete; I've been really busy with other stuff), and 2) taping the blooms more often than that, since the thrips like the blooms better than the leaves.

Finally, the annual Canna harvest has happened. Here are a couple pictures: 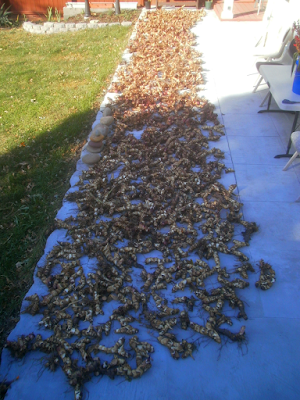 Last year, I'd guessed as a ballpark figure that we'd dug up about 400 pounds (~180 kg) of rhizomes, but I measured more precisely this year and came up with 438 lb. (~200 kg), so clearly last year's number was a bad estimate. I think they're more than doubling in weight each year, on average, but I don't have great information for how many we started with (I apparently didn't take any photos), so that's a guess. It does look, though, like if we really wanted to and it weren't a completely insane thing to attempt, we could have a literal ton (2000 lb. / 900 kg) of Canna rhizomes to dig up in the fall of 2017. As the planting and digging up mainly falls to the husband to do, I'm guessing we're not actually going to reach that point, no matter how appreciative the hummingbirds would be. But it's sort of fun to think about.

What a huge canna haul! Those things really do increase exponentially. I usually leave about half of them in the ground, figuring that any that survive winter will be extra strong and give a headstart to blooms, but I guess your winters are too cold for any of them to survive. What color are your cannas? I don't remember seeing any pictures of them. I've got Yellow King Humbert, if you'd like some.

I've toyed with the idea of leaving some of them in the ground, because we do sometimes have unusually warm winters and maybe they'd survive, but so far, I've never taken the gamble. Though this would maybe have been a good year to try; El Niño winters are supposed to be warm here.

They all bloom red; I assumed that I must surely have posted pictures at some point or another, but when I looked at what posts were filed under "Canna," the only photos I saw were close-ups (2014, 2011). So that will have to be corrected soon, because believe me it's not like I don't take photos of them. (Though this year, a lot of the photos looked pretty crappy, because the Japanese beetles ate the hell out of the leaves.)

For the bugs, have you tried a small hand-held vacuum? Ehow said to wet the leaves first (I suppose to make it harder for then to run away) and then to go after them with a hand held vacuum, promptly disposing of the bag afterward. It's just a thought, the taping sounds like an enormous pain.

I could see that working for something with lots of small leaves (Breynia) or very finely-divided leaves (Polyscias), but with Anthuriums, I imagine it would wind up mostly being an exercise in getting leaves stuck to a vacuum hose and having to peel them off, over and over and over. Maybe it could be useful with the smaller seedlings, but there'd also be a serious risk of sucking the whole seedling into the vacuum, or sucking up all the potting soil, or something like that, so I think it'd cause as many problems there as it would solve.

A vacuum cleaner also wouldn't do anything about the scale, which are aerodynamically flat and stuck firmly to the leaves besides.

The taping certainly is an enormous pain, yes. And even if perfectly executed, it's not even going to eliminate the bugs, which have too many other places in the house to hide and regroup. But . . . well, actually, I don't think I have a "but." It's just an enormous and ineffective pain. The end.